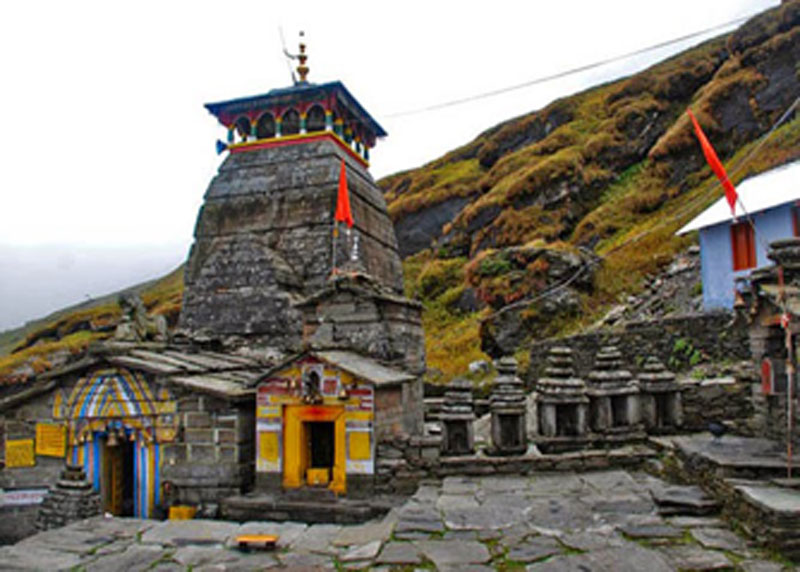 How to Reach?
Kedar Resorts, Guptkashi to Chopta by Road: 45 Km.
Then trek 03 km to Tungnath. You can hire pony / horse / doli (Sedan Chair) from Chopta.

Tungnath is one of the highest Shiva temples in the world and is the highest of the five Panch Kedar temples located in the mountain range of Tunganath in Rudraprayag district, in the Indian state of Uttarakhand.
The Tunganath (literal meaning: Lord of the peaks) mountains form the Mandakini and Alaknanda river valleys. It is located at an altitude of 3,680 m (12,073 ft), and just below the peak of Chandrashila, and is the third (Tritiya Kedar) in the pecking order of the Panch Kedars. It has a rich legend linked to the Pandavas, heroes of the Mahabharata epic.

According to Hindu mythology, Lord Shiva and his consort, Parvati both reside in the Himalayas: Lord Shiva resides at Mount Kailash. Parvati is also called Shail Putri, which means ‘daughter of hills’.

The Tunganath is indelibly linked to the origin of the Panch Kedar temples built by the Pandavas. The legend states that sage Vyas Rishi advised the Pandavas that since they were culpable of slaying their own relatives (Kauravas, their cousins) during the Kurukshetra war, their act could be pardoned only by Lord Shiva. Consequently, the Pandavas went in search of Shiva who was avoiding them since he was convinced of the guilt of Pandavas. In order to keep away from them, Shiva took the form of a bull and went into hiding in an underground safe haven at Guptakashi, where Pandavas chased him. Later, Shiva’s body in the form of bull’s body parts rematerialized at five different locations that represent the “Panch Kedar”. The Pandavas built temples at each of these locations to worship and venerate Lord Shiva, seeking his pardon and blessings. Each temple is identified with a part of the bull or Shiva’s body; Tungnath is identified as the place where the bahu (hands) were seen; hump was seen at Kedarnath; head appeared at Rudranath; his navel and stomach surfaced at Madhyamaheshwar; and his jata (hair or locks) at Kalpeshwar.

Legend also states that Lord Rama, the central character of Ramayana, meditated at the Chandrashila peak which is close to Tungnath, in India. It is also said that Ravana performed penance to Shiva, the lord of the peaks, when he resided here.